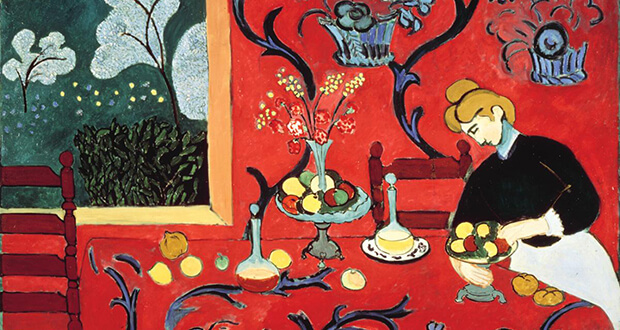 “The jewels or the arabesques never overwhelm my drawings from the model, because these jewels and arabesques form part of my orchestration.” Written words by Henri Matisse in1947. “Matisse has the sun in his belly”, said with admiration Pablo Picasso, big friend and rival at the same time.

The exhibition presents over hundred works of the French artist with some masterpieces never shown before in Italy, all coming from the most prestigious European and American museums, like Tate, MET, MoMa, Pompidou, Orangerie, Philadelphia, Washington, and a special contribution by Pushkin Museum of Moscow and Ermitage of San Pietroburgo, the richer worldwide collections about Matisse.

Ester Coen is the curator and works with the help of a scholarly committee of John Elderfield, Remi Labrusse and Olivier Berggruen. 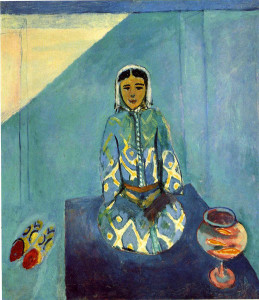 “Morocco, the Orient, Africa and Russia– tell the curators – in their most intensely spiritual essence, their essence most distant from the purely decorative, were to suggest new compositional patterns to Matisse. The arabesques and intricate geometrical designs found in the Ottoman world, in Byzantine art, in the Orthodox world and in the early painters whose work he had studied in the Louvre were all elements that Matisse interpreted in an extraordinarily modern manner, formulating an artistic vocabulary which ignored the precision of natural forms in order to brush with the sublime.”

The French artist Henri Matisse (1869-1954), with primordial refinement, absorbs the colorful Oriental soul and describes it with colors and precious decorative elements, since the time of the big exhibitions in Paris during the XX Century. Russian icons, Byzantine world, chromatic intensity of Oriental art and artifacts, decorations, ceramics and carpets represent for Matisse a leitmotiv for his deep exploration of painting and color and lines aesthetics.

After an appendicitis, Matisse dedicates himself to painting, attending from 1893 the atelier of the Symbolist painter Gustave Moreau. In 1895 attended the ‘École des Beaux Arts, and visited exhibitions about the Islamic art, in particular the Universal exhibition in 1900, focusing on the areas dedicated to Turkey, Persia, Marocco, Tunisia, Algeria ed Egypt.

The next year he moved to Italy, visiting Florence, Arezzo, Siena and Padua, getting inspired by the masterpieces of Cappella degli Scrovegni of Giotto.

Matisse spent time also in avant-garde galleries, like the one of Ambroise Vollard, where he bought in 1899 Van Gogh, Gauguin and Cézanne‘s paintings, a Rodin‘s plaster work, becoming great influential artists for his personal creative path. The final intuition came with the Exhibition of Mohammedan Art in Munich in 1920, an art event that was going to influence also artists like Kandinsky and Le Corbusier.

In Moscow, Matisse works for installations “The Dance” and “Music” for the Shchukin collection. Then, in 1912, he traveled to North Africa, staying in Tangeri, where he became bewitched by light and blooming nature.

The exposition shows at first the marvellous painting “Calla Lilies, Irises And Mimosas” (1913), a still life that announces the magical palette of azures and greens; it continues with paintings belonging to the primitivism period. Geometrical and stylised brush strokes and dark colours become the main attraction like in Portrait of Yvonne Landsberg, Italian Woman, Girl with a Persian Cap and Three Sisters.

Plum Blossoms, Green Background and Fruit Plate and Flowering Ivy in a Pot With a Rose testifies Matisse’s interest in Japanese art, like his curiosity for dazzling colours of Mediterranean world in Zohra on the Terrace and Moroccan in Green , the outstanding landscapes in Periwinkles / Moroccan Garden, Trivaux Pond and Palm Leaf, Tangier .

Then it comes the time for the Matisse’s predilection and study of female body, with paintings odalisques reclining, seated or standing, with seductive curves and arabesqued fabrics: Blue Odalisque, Two Models Resting, are finely combined with sophisticated female nudes and profiles. The exhibition section continues with Moorish Screen and the passionate Nude in Armchair, Green Plant.

Other masterpieces participating to the exhibition are Spanish Woman with a Tambourine, Interieur à Etretat, Buisson, Arbre and the closing Goldfish.

“The maximum simplicity converge with the maximum fullness”, this is the secret of Matisse artistic works, expressed in his words: ” One tone is just a color; two tones are a chord, which is life.”

Matisse – like other artists of that time, for example Picasso- collaborated for Russian Ballets of Diaghilev, and at the Scuderie’s rooms we can admire costumes realized for scenes of Chant du Rossignol in 1920, drawings for the choreograph of Léonide Massine for the ballet on the Stravinskij‘s notes, like a sort of musical where dance, music and painting interlace with each other in order to create and unique and phenomenal play.

The exposition will be enriched by a variegated programs of encounters and lectures to help visitors and scholars to immerse themselves deeply into Matisse world, to know better his legacy and influences in the modern culture, not only for the visual arts but also in music and dance.