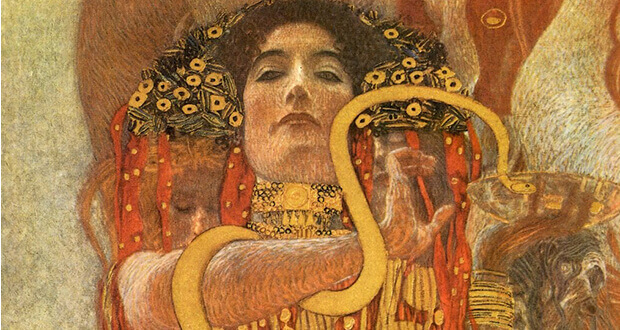 The artistic path of Gustav Klimt is almost entirely identified by the artistic temperament of the so called Vienna Secession movement. Born in the late 1800s between Germany and Austria, it includes the artistic movement that had resigned from the Academicism. In that period Europe was breathing the new artistic wave called Art Nouveau with new stylistic language applicable for architecture, figurative and applied arts. The Vienna Secession was founded in 1897 and involved artists such as painters, musicians, writers and architects based in one of the most charming and sophisticate European capitals, Vienna.

The exhibition wants to look into the family and affective relations of Klimt and his formidable passion for theatre and music. Early portraits from Gustav to his family are displayed near his brothers Ernst and Georg works, besides original photos inherited by the artist, paintings from Castle Belvedere Museum of Vienna and more other. We can count around one hundred masterpieces like Adam and Eve, Salomè, Sunflower and Moving Water.

A special attention is pointed to the early works of Klimt, his education at the Kunstgewerbeschule of Vienna and his start as decorator for representative buildings and his following the Hans Makart footsteps, an important introduction to his modernist evolution, as the Belvedere manager Agnes Husslein-Arco pointed out in the catalogue: “Few people know that the Künstler-Compagnie, Company of Artists founded in the 1881 by Gustav Klimt, his younger brother Ernst and Franz Matsch, had been active for almost twelve years standing out for the decoration of public buildings, especially theatres. Thanks to these assignments the popularity of this painters society increased, especially for Gustav Klimt”.

The Beethoven Frieze, inspired by the ninth symphony of the musician, will be recreated as it was set up by Klimt in 1902. It will occupy three walls of the room; it’s composted by seven panels of 2 meters height and 24 meters of length. The technique to create it it’s really elaborated, starting from a casein on plaster to adorn the work with mirror chips, glasses and nails. This painting portrays the eternal fight between good and evil, a mean to reach the happiness, metaphor of the golden tree of live and a young woman waiting for her beloved to hug: a re-conquered happiness.

The same happiness is shown in the work called The Three Ages of Woman preserved in the Gnam Museum of Rome, where the maternity represents harmony in itself. Klimt visited Venezia, Ravenna and Firenze and these cities gives the start to a golden circle in which canvas are transformed into precious stones of spirit. Giuditta I (Salomè) will be the first woman to be covered by jewels by Klimt. In Giuditta II of 1909 the same woman is offered to the user in a more dramatic and sensual way.

Klimt embraced the spirit of a golden age focused on themes such as being, life and death and the artist favorite dichotomy, the woman-man relation. Klimt used symbolism, allegory and an emerging expressionism to externalize the myth of the female body and his obsession for women, inherited from the fragility of a man that lived till maturity with his mother and sisters.

Three important female portraits, Lady by the Fireplace and the two Portrait of a Woman dated 1894 and 1898, better explain the peculiar relationship between Gustav Klimt and the female universe. In addition, there will be two rooms dedicated to the portraits and the landscapes, Klimt favorite genre adopted from the Secession.

Some recently discovered love letters, written to Emilie Flöge, are on display to explain the intimacy of his sentimental life. After the rain and Cows in Stall , are some of the works on show concerning the landscape dedicated rooms together with a large overview of the Austrian landscape paintings, from the impressionist artists to the secessionists ones like Carl Moll and Koloman Moser. In the exhibition there is a room also for Klimt’s works that followed the symbolism language, showing paintings like Family.

Gustav Klimt was one of the most innovative European men of 1800s, the highest figure of the Art Nouveau and Vienna Secession, the introducer of a new artistic movement that, with brilliance of lights and marvelous chromatism, has left a mark on the history of Art. In that period it was easy to find the influence of Matisse and the Fauves movement, like in his pupil Egon Schiele.