Home Events/Exhibitions In London, the splendor of Paolo Veronese, magnificence in Renaissance Venice 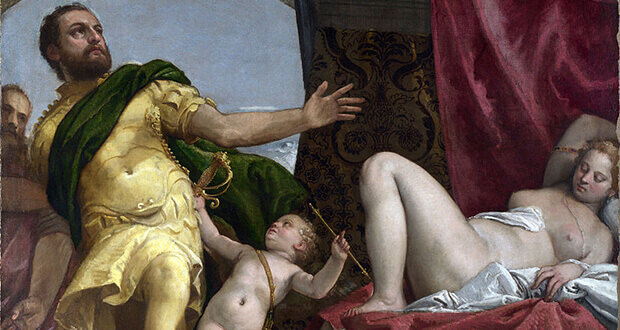 “From the deftly captured shimmer of a pearl, to the sweep and splendour of his architectural settings, Veronese’s mastery of colour, space and light, and his feeling for beauty, for opulence and grace, have captured the imagination of countless artists and art lovers ever since”.

These are the words of the director of the National Gallery, the temple of world painting, Nicholas Penny, describing to the Anglo-Saxon public how and why Veronese is considered one if the most influential master of the Venetian Reinassance, end why the exhibition of 50 of his best works from all over the world, is not to be missed. He is, along with Titian and Tintoretto, a sort of “triumvirate” that marks the highest of Venetian painting of the sixteenth century.

He was already a skilled artist when, in his early twenties , Paolo Caliari (1528-1588), born in Verona and for this reason called Veronese, moved to Venice around 1550. He was trained at the workshop of Antonio Badile (about 1518-1560 ) , whose daughter he married in 1566. His father was a stonemason and his mother was the illegitimate daughter of a nobleman named Caliari , a name that the artist adopted in 1550.

He hardly ever left the city of the lagoon until an unexpected death took him when he was  60 years old, working prodigiously and consolidating his reputation as an artist, appreciated and demanded by clients across Europe. Beauty, drama and monumentality are the salient features of the work of Veronese’s and immense is its impact in the history of art, “because he has always been one of favorite painter of painters” recalls the director of the National Gallery.

Without seesawing trends, his posthumous fame was immense and constant, and his masterpieces have been admired over time by masters such as Van Dyck , Rubens, Watteau , Boucher , Tiepolo, Carracci , Delacroix and Renoir. Artists have always admired the ability of the Veronese to represent the skins, the pearl complexion, the redness of the cheeks of womens. The massive and luxurious guest rooms of the National Gallery give to the huge paintings made by Veronese “the space and the light that they deserve.“

In London will be gathered in this exhibitions the fundamental and distinctive paintings of the infinite range that the Veronese deepened during his energetic and successful career : the monumental altarpieces leaving Italy for the first time, portraits and other works on loan from the Louvre, the Getty Museum, the Prado and the Palazzo Pitti in order to revive the “Splendour in Renaissance Venice“.

A huge altarpiece of 1565 considered the masterpiece by Veronese, ” The Martyrdom of St. George“, for example, leaves for the first time the Church of San Giorgio in Braida, Verona and can be seen next to the magnificent “The family of Darius at the feet of Alexander“, property of the National Gallery, painted in the same year. “The Adoration of the Magi“, painted for the church of San Silvestro in Venice, sold to the National Gallery and just restored for the exhibition, is shown for the first time since the Veronese age with the other version of the same theme, painted in the same year for the church of Santa Corona in Vicenza, and “the mystic Marriage of Saint Catherine“, from the Gallerie dell’Accademia, Venice.

Another sensational circumstances of the exhibition is that the paintings will be reunited in exposure after hundreds of years. Among these, ” Venus and Mars joined by Love” (Metropolitan Museum of Art, New York), wich leaves for the occasion of this exhibition the U.S. for the first time since 1910 and will be shown together with the “Four Allegories of Love” of the National Gallery, which has not happened since the eighteenth century.