Home Events/Exhibitions The Metamorphoses of Paul Gauguin at the MoMA, New York 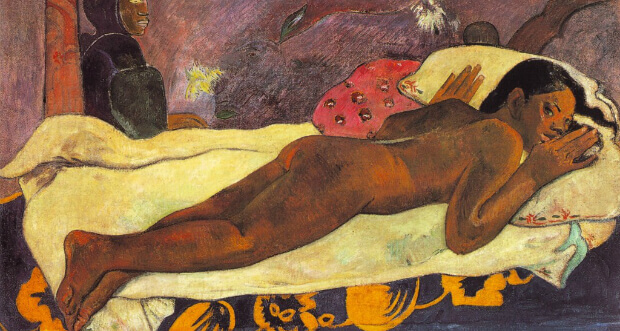 Although Gauguin (1848-1903) is best known as a pioneer of modern painting, this exhibition presents a less known, but perhaps even more innovative aspect of its artistic life. A painter, but also carver, printmaker, ceramist and lithographer. The MoMa, in this moongraph “Metamorphosis” explores these other aspects of Paul Gauguin, describing the close relationship between different times and productions of the artist through about 160 works which have never been shown, some of them coming from private collections. Stockbroker in Paris, wealthy, Paul Gauguin left his secure job for an adventurous life traveling between Martinique, Brittany, Arles, Tahiti and, finally, the Marquesas Islands. After exhibiting with the Impressionists in Paris, he invested all his energies in order to reach a “primitive” expression. A style that will be very influential for the future generation of artists.

Self-taught, traveler and researcher obsessed by originality, Paul Gauguin has produced a multitude of experimental woodcuts, reliefs, sculptures and serial works that are less known of his oil paintings of Tahitian women, but emits new light on an exciting series of prints and designs. “He had a strong belief in his genius, doing things that no one had done before. Taking different materials and develop new techniques was his way to create“, added the curator Starr Figura, who consider Gauguin the father of the modern concept of incision. “The idea that led to the preparation of this exhibition – explained during the press preview – was to provide a different point of view of an artist that we all think to know. We believe that the untold story of Gauguin is The prints of Gauguin precisely”.

To better investigate the similarities between these trials, Metamorphosis was divided into groups. Zincographs: The Volpini Suite, named after the Café Volpini in Paris. During year 1889, Gauguin created his first prints on zinc plates rather than the conventional limestone slabs used for lithography. Woodcuts: The Noa Noa and The Suite Vollard Suite shows its first cuts on the wood. Mostly it comes to subjects that evoke Tahitian atmospheres. Watercolor Monotypes presents Gauguin working on oil or watercolor prints transferred to paper.

Finally, the group ‘Oil Transfer Drawings‘ is an insight into the technical transfer of oil paintings, which he invented. It is a hybrid between a drawing and a print: each transfer of drawing is a kind of work on two sides, with the pencil drawing of one side and the transferred design to the other. “First sprinkle the printer ink on a sheet of paper – explained Gauguin himself – then you put it on a second sheet of paper and draw something you like. The pressure of the pencil causes the ink sheet under adheres to the lower part of the sheet above. When you lift the upper sheet the drawing is transferred, in reverse, on the rear. The result of the transferred image is the final artwork“.

Referring to Giotto, Raphael and Dominique Ingres as art archetypes, the figures drawn by Gauguin are defined by a sharp boundary line, fine and decorative. These are drawings in which is celebrated the painted image of a Maori queen with the insignia of royalty and sensuality, the fan and mangoes, the Queen Barbara is Venus and Eve together, the wooden mask recalls demons, pagan ones or of Christian’s hell; images of classical myths, Christian and Maori. Gauguin has interiorized the physical and symbolic reality of the Polynesian world contaminating it with the rich “baggage” of art reproductions he brought with him from Europe .

One of the virtues of this exhibition, revelatory of a dark Gauguin, is that it offers the opportunity to review our interpretations of primitivism. Gauguin, with its child-brides has represented savages attitudes, has portrayed a Polynesia where nature becomes a symbol of supernatural heavenly values ​​and human figures become icons of a simple, authentic and spontaneous humanity.

The dominant presence of its representations is the female figure of the Polynesian vahiné, often depicted in poses witch are so “natural” to appear discordant compared to the European sexual morality. But the primitivism of Gauguin was never a fashion copied from the South Pacific. On the contrary, a “noble” primitivism. It ‘easy to say that Gauguin with his hypercoloured paintings was an “exotic” painter, but if we dive into the mysterious prints we find out that they propagate a different and unexplored pulse: Polynesia is suddenly no longer a bucolic paradise untouched by European people, but a more global location, unavoidable from the conflicts and obsessions.

The experience in the “South Seas” is considered paramount in the production of the artist, since in Polynesia Gauguin resolved many nodes and ambivalence brought to light by the symbolism. Indeed, it was in these places that the original painter saw his art matured into a full  and modern symbolism, bringing his sophisticated primitivism to excess. New landscapes, different light and colors, people with physical characteristics and completely unusual habits. He then revisited these new subjects by treating them with its exceptional sensitivity. Renato Barilli, referring to the painting entitled Manao Tupapao (The spirit of the dead awake), commented: “It’s the artist himself, who observe how the laying of vahiné, obscene according to our strict code of sexual intercourse, it is not in the Maori at all, where instead expresses helpless abandonment and almost propitiatory to the forces of the unknown and of death“.

Paul Gauguin created a “dream” capable of encourage the instinctual sphere with color, in shades of bluish and cold ones and in purple, green and yellow, and with the lush trees, symbols of ceaseless regeneration of nature. Gauguin had received a letter by his friend Henry de Monfreid, in which he wrote: “Currently you are the fabulous, legendary artist who send from the Pacific Ocean bewildering but inimitable creations, of a great man who disappeared from the world. You enjoy immunity of the famous who died and went to art history”. Gauguin was no longer able to attend his triumph. I wonder how he would react to this sudden applause of the world, this hated and unbearable world, from which you could only escape. But suddenly, civilization, complicated as it was, recognized itself right in him, in his hatred for the world and in his utopia of primitive and redemptive nature .