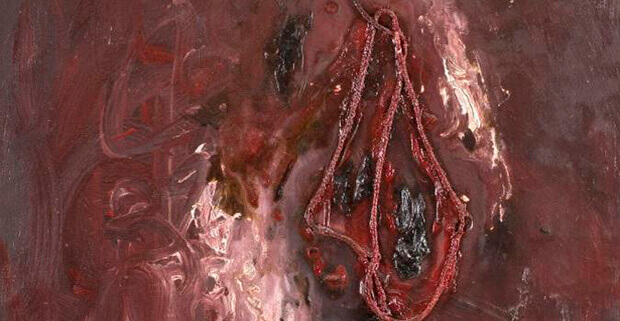 “I talk to who (friends) loved my paintings and now can’t appreciate my new way of representation. Starting from the concept that Art cannot be repeated, that art itself has to seek always new invention and new reality and it is an art duty to leave behind its own cadavers, should it be right to continue with this tonal satisfaction, in the taste of dead nature and dead flowers? I have some years of life left and I want to spend them by searching for a new conception of time, space and reality. In order to reach a different point of view about the everyday story, the one that reduces a man to an object and not anymore to a subject, giving away means desire for living, the will of unwrap the cellophane for start to breathe.” This quote from Mario Mafai (1902-1965) diary, perfectly expresses the various shades of the artist.

Tinplate double-bed shaped walls are used as a easel-installation for many paintings as an homage to the Greek artist. Natural conclusion to a relay race of harmony that starts on 1960, when an unknown student of the Fine Arts School of Rome lunched his fist preview at the Galleria della Tartaruga. During the inauguration, the young Jannis Kounellis was approached by the famous master whispering to him: ”You are a painter”.

This famous master was Mario Mafai and after this mutual discover he gave the baton to Kounellis, an inheritance that will influence all the Greek artist production, even when he became a protagonist of the most anti-pictorial Poor art. The exhibition, entitled “The Freedom of the Painter”, celebrates the union of Mafai-Kounellis and presents nearly forty Mafai’s works from 1957 to 1965, year in whihc the artist disappeared from the scene, highlighting his abstract art production.

Mario Mafai, painter from Rome, donated a great contribution to the Italian cultural environment of the XX century. He gave life to the <strong of Via Cavour, thanks to the triad Mafai-Raphael-Scipione, creating a den for artists, scholars and intellectuals, all the artists diverging from the ”Return of the

Order, avant-garde movement that acclaimed the traditional style. In Mafai’s artistic debut he expressed himself through landscapes, shapes, dead natures and flowers, including views of suburbs, paintings of the city Fiumicino and portraits colored of red, purple and ochre, all with a pallid tone of brown earth. The brush stroke appears fearful, showing a tormented artist, anxious to express his sincerity and integrity. From 1957, Mafai rejected the figurative style, his previous artistic path and starts using a bold smashing of colors and shapes, reaching the abstract planet. A radical metamorphosis that starts with criticizing his closest collectors, gaining the accuses of ”betrayl”. “I am the same. I just renounce the affective attachment to the objects and pleasure textures; I turned to be more free, more naked.”. This is Mafai’s answer to who doubted on his honesty and bold choice. No betrayal at all but just a will to reduce the painting of a pure essentiality, concept displayed in the exhibition with 30 works of his informal period and his series of ”Ropes”. This courageous transition is the result of his coherence with ideals and braveness in preferring his intimate and passionate ideas to a easy success.

Kounellis paid a tribute to the works of a brave man, nonconformist, a rejecter of the bombastic decades and capable of reinventing himself at the age of 56, leaving behind a past of honors and admiration to try new creative adventures. With the patronage of the Mafai Raphael Studies center, the exhibition confirms the turning style of his path, maturated from a deep inner need. We can read on his Diary (1995): ” The only thing that can save the current decadence is the creation a new relationship between man and society.”. Kouneliis adds: “ I consider Mafai as an hero. A man that suffered, a victim but also a symbol of the humanistic culture recovery. His a real and credible intellectualist. Today, as after the second post-war period, we need to start again, to fight against the moral decline that surrounds us”.

As Piero Dorazio said, “Mafai, during the tragic period of the Regime and the dark post-war one, was, especially for the young, the only valid example to emulate. “

The works are displayed without a chronological order, the exhibition under light the period of the Scuola of Via Cavour with paintings like Sunset on the Lungotevere or Self-portrait and the fifties years with works like Roofs and Dilate the memory. “In some way –Bruno Corà, the exhibition curator, said –Kounellis supported hardly Mafai’s works. He saw his master as a real painter, free and sincere, always with a smell of turpentine “. The deep connection with the two artists, even if with different stories, starts with the mutual love for Rome, a difficult and wonderful city, impossible not to appreciate.

There is also a documentary section set by the daughter of the artist, Giulia, with a lot of pictures that narrates Mafai as a man and a painter, catalogues about events and exhibitions, books, posters and also an autograph of the 4th February 1965. It was the artist’s last notes on his diary and recognizing his calligraphy arouse positive emotions and smiles: “Tonight I fell really well. Hurray! The

spirit come back and the matter is defeated: I did not have faith in it. Bad. The spirit won!