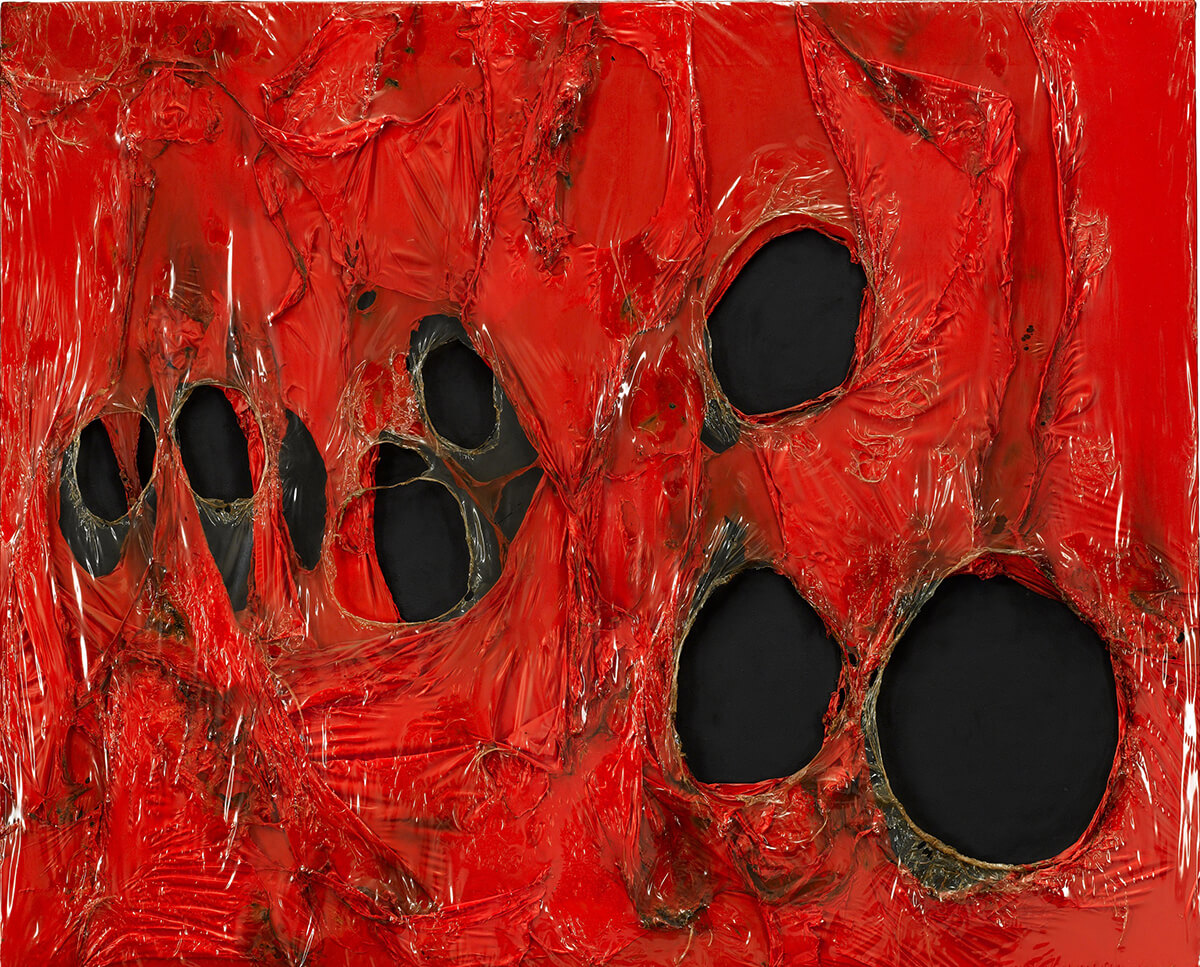 Who would have predicted that a doctor and prisoner of war would become a star of modern art, a skilled master plasmator of materials?

New York since yesterday shines with new light. The exhibition of Alberto Burri lights the eccentric architecture of the Guggenheim Museum, which is an ideal location to house the masterpieces of the great Umbrian artist. Previous exhibition was in 1977, 38 years ago.

Walter Verini, promoter in the italian parliament of the “Law for the Centenary of Burri“, attended the event: “The hundreds of Yorkers intellectuals and citizens who crowded the preview were excited, as well as journalists who crowded press conference, as well as many Italian residents, together with the delegation coming from Umbria and the city of Città di Castello. A great exhibition, exciting works, partly never seen because they’r coming from private collections. An extraordinary business card for Italy, for Umbria and for the Città di Castello where Alberto Burri was born. A hope, a greater trust, so that the Centenary of the Master could last more than an year“.

With this exceptional retrospective, “Alberto Burri: The Trauma of Painting“, Burri come back to USA on the centenary of his birth, in that world that first discovered him and that now celebrates him with the largest exhibition ever staged in the United States. One hundred masterpieces of Umbrian artist in the rounded building designed by Frank Lloyd Wright.

The exhibition acclaims the Italian master as the protagonist of the global art scene after World War II.

We feel, in the way the artist scours the charm and the problematics in the creative evolution (which is the pillar of the masterpieces of Burri), the total divorce from the canvases and styles already established, praising the new and personal techniques with the use of unique pigments, seams, combustions, lacerations and poor materials. Noble traveler between collage and assemblage, Burri, preferred to devote himself to the the manipulation of ripped and patched jute bags, canvases with embossed protrusions and plastic industrial mix instead of brushes and paintings.

An absolutely abstract lexicon externalized in works that allude frequently to human bodies, veils and refined wounds of private parts, with a feel that anticipates the feminist art movement of the ’60s.

Burri and the sacks

Many US critics, artists and gallery owners become interested in the works of Burri since the first half of the fifties. Robert Rauschenberg was influenced by observing his experiments during the visit in his studio in Rome in 1953. Since the 60s Burri often exposed its works in US galleries with exhibitions that left important remains in the art scene of New York and Chicago.

The exhibition at the Guggenheim, supervised by Emily Braun, has an historical significance, a unique opportunity to raise awareness to the younger generation of the universal linguistic revolution of Burri’s painting.

“Alberto Burri: The Trauma of Painting” was made possible thanks to the support of Lavazza. We also thank The Andy Warhol Foundation for the Visual Arts that supported this initiative and the generosity shown by the Leadership Committee of the exhibition, chaired by Pilar Crespi Robert and board member Stephen Robert. A special thanks goes to Maurice Kanbar, Luxembourg & Dayan, the Richard Roth foundation, Isabella del Frate Rayburn, Sigifredo of Canossa, Dominique Lévy, Daniela Memmo d’Amelio, Samir Traboulsi, Gioietta Alberto Vitale, and those who prefer remain anonymous. Additional funds were made available by the Mapei Group, E.L. Wiegand Foundation, the Mondriaan Fund, the Italian Cultural Institute of New York, The FondazioneNY and the New York State Council on the Arts.