Home Events/Exhibitions Alfons Mucha and the Art Nouveau. In quest of beauty 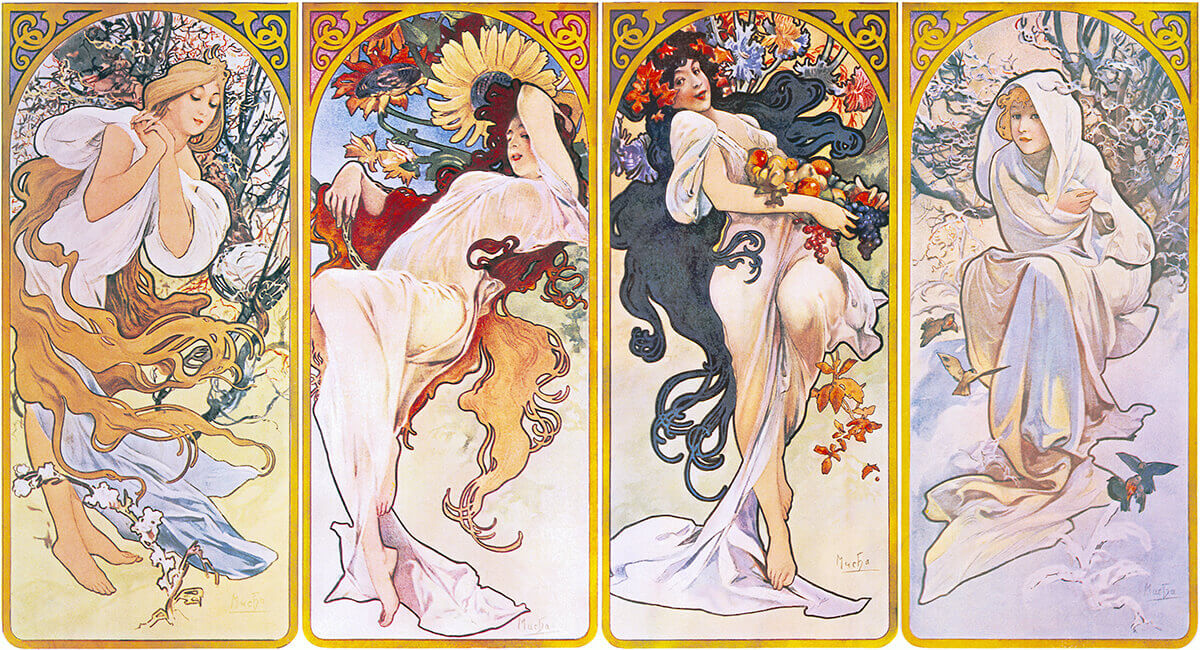 An exhibition about the maximum exponent of Art Nouveau, Alfonse Mucha (1860-1939) that makes us relive a life dedicated to art with 200 works on display, including paintings, drawings, theater posters, sculptures, magazine covers, calendars, illustrations books, jewelery and furniture.

We all know the preciousness of his drawings, the care in the realization of posters of the city of Paris fin de siècle, but reviewing the Mucha pictorial phase, his canvases in large formats, is always a feeling that fascinates.

Unfortunately the lightings, always insufficient, poor and clumsy are not what we like to see in an important exhibition like this: some works were almost entirely in the dark. However, we have become accustomed to this deficiency, in particularly at the Vittoriano.

Alfonse Mucha was born in today’s Czech Republic in 1860, demonstrating immediately an uncontrollable passion for drawing; 19 years Mucha worked as an apprentice painter of theatrical scenery in Vienna and keeps portraying members of the nobility. Earl Karl Khuen of Mikulov Belasi became interested in his work and commissioned him the frescoes in his castles in Moravia and Tyrol.

Alfons Mucha and the nobility

The Earl was enchanted by the work of Mucha and helped him financially allowing him to enroll in the Academy of Fine Arts in Monaco of Bavaria. Irregular student, traveling chaotically from Monaco to the United States, at age 27, in 1887 he made the leap moving to an effervescent Paris, freshly painted by modern World Expo and with a bubbling economy. Illustrating books, catalogs and calendars allowed him to eke out a living, but although he worked incessantly, Mucha was still unknown.

Thanks to the friendships of the group of artists, in 1894 he meets Sarah Bernhardt, the greatest actress of the time. He drew for her in one night the manifesto of La Gismonda, a theater show which launched him into an overnight success. He then drew lots of other theatrical posters, among them the famous lithograph La Dame aux camelias: begins the golden fable of Alfons Mucha.

Its characteristic is the extreme refinement in the technique with a clear and precise line that marks the feminine silhouettes in the elegance of their forms and poses. The young womens of Mucha wear sophisticated neoclassical clothes, enveloped by floral motifs that surround the geometric frames skirting the figures.

Alfonse Mucha, one of the absolute masters of Art Nouveau, an original style easily recognizable by the exuberant flourishes that we find in all his work, and the natural hairstyles of the womens who are full of indescribable sex appeal. His style was imitated immediately, both in art and in advertising, of course with far results from the Czech master.

Idealism, love and spiritual union for his homeland can be clearly seen in his art even though his personality was extremely cosmopolitan.
Few know, however, that Mucha was also a Mason of the “Orient de Prague”, then Grand Master of the Grand Lodge of Czechoslovakia and finally in 1923 the Sovereign Grand Commander of the Supreme Council of the Ancient Scottish Rite. A responsibility delayed in time, in a nation that lived only a short time of freedom and democracy before the barbaric Nazi oppression.

The exhibition consists of over 200 works including paintings such as Self-portrait and France Embraces Bohemia, Poster for Gismonda and Sarah Bernhardt such as La Princesse Lointaine, drawings, including studies for “By force towards freedom, with love towards unity!” and for The Age of Wisdom; the jewelry of the Universal Exposition of 1900 such as Ornamental chain with pendants and Peacock ring.

There are six sections in which the exhibition is divided: A Bohemian in Paris; The creator of the Mucha Style; A cosmopolitan; The mystic; The Patriot and The artist-philosopher, and is curated by Tomoko Sato with the organization of Arthemisia Group.